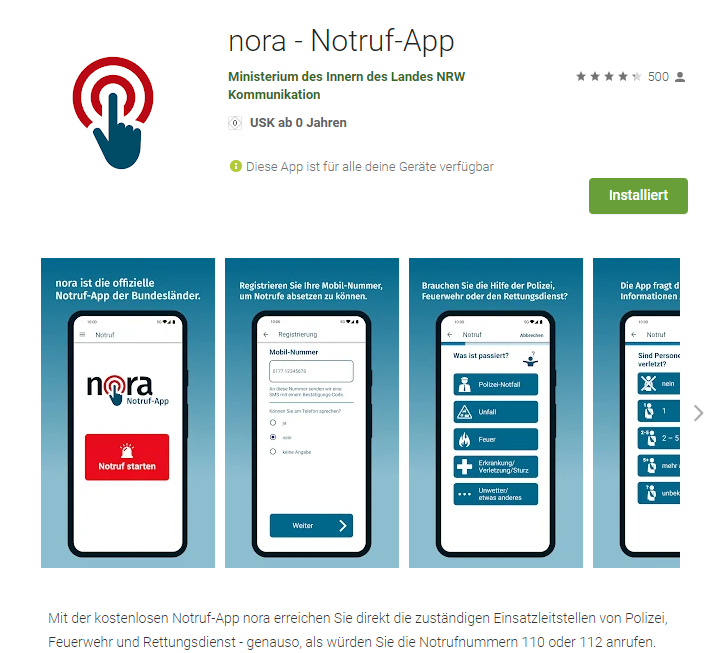 We would like to point out the emergency call app „nora“, which can be used to make emergency calls from a smartphone without having to hear or speak. The app is particularly interesting for people with limited speech or hearing abilities or for fellow citizens who can neither speak German nor English. It is available for iOS (Apple) and Android and can be downloaded free of charge from the respective stores. The app is published by the German Federal States.

WHAT KIND OF HELP CAN BE REQUESTED?

HOW DOES THE APP WORK?

First, you are asked for the emergency call location. By default, the current own location is suggested, which is determined by the smartphone via GPS (satellite navigation). If the emergency location is not the current location, another location can be entered by using address data. The next step is to select what happened: Is it a police emergency, an accident, a fire, a medical emergency or something else? Depending on the type of emergency call, you can specify more precisely in the further steps what has happened or how many people are affected.

After the emergency call has been sent, the control center employee may ask further questions via a chat or call the cell phone from which the emergency call was sent. In the case of police emergency calls, e.g. in the event of a break-in, you can specify before sending the call that it is a „silent emergency call“ and that you do not want to be called back by phone. If desired, some personal data such as name, phone number, basic illnesses or disabilities can also be entered in advance, which will be automatically transmitted during the emergency call.

The app enables people with limited speech and hearing abilities to contact the control centers of the police, fire department and ambulance service directly. However, it can also provide valuable services if people do not know how to describe their current location precisely, for example, if they are in a city that is unfamiliar or in the woods.

Currently, nora is available in German and in English. All operating elements of the app are provided with icons. These allow operation even for users who speak neither German nor English.

In the picture gallery at the bottom of this article, you can see how a small fire could be reported via nora. There is a demo mode in the app where you can try out all the steps without sending an actual emergency call.

More information about the app and explanatory videos can be found on the website https://www.nora-notruf.de.